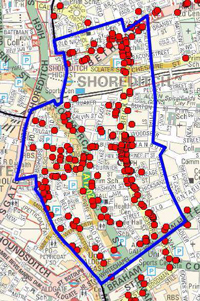 The proposed Saturation Zone area is detailed in the map below. The map shows all of the premises (red dots) currently licensed under the Licensing Act 2003 in the Brick Lane Area. The proposed area is defined by the blue line.

The Borough of Tower Hamlets is holding a public consultation on Wednesday, Feb 13 at 6:30pm at Toynbee Hall (28 Commercial Street, E1 6LS) on its proposed Brick Lane saturation zone. The popular nighttime destination already has licenses for 200 or so establishments.

The proposed policy would not ban alcohol sales in the area, but would have an impact on future applications for premises that serve alcohol or late night refreshment. Moving to a presumptive rebuttal footing would allow the council to restrict new licenses if there is a concern that the business would likely add to existing problems in the Brick Lane area, which tend toward anti-social behaviour.